Breastfeeding: A Key to Sustainable Development 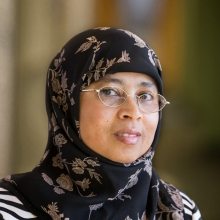 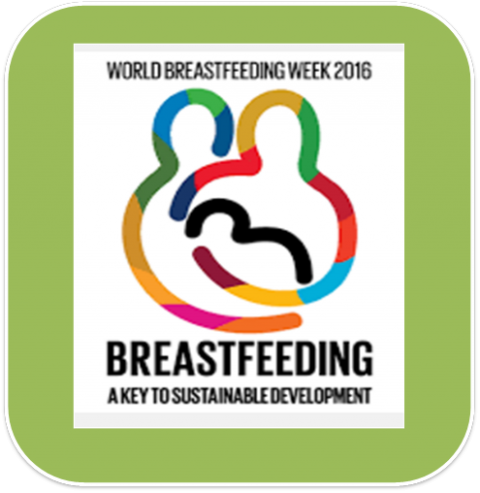 In celebration of National Breastfeeding Month and WBW 2016, here are some key facts about breastfeeding in the hopes of serving as a resource and empowering women to be successful at breastfeeding.

The WBW 2016 theme is linked to the development of a sustainable world in several ways:

The objectives for WBW are highlighted in Figure 1. 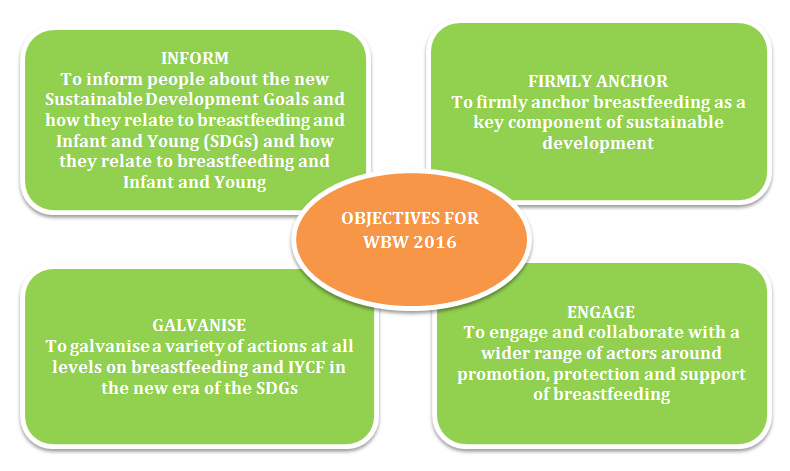 The American Congress of Obstetricians and Gynecologists (ACOG) and the American Academy of Pediatrics recommend that infants be exclusively breastfed for about the first 6 months of life. They recommend only breast milk with no solids or other liquids except vitamin/mineral supplements or medications for the first 6 months, with introduction of nutrient-rich complementary foods at about age 6 months.

Globally, only about two-fifths of infants (39 percent) are exclusively breastfed for the first 6 months of life. In the United States, while 80 percent of mothers start out breastfeeding, only 21.9 percent of babies are exclusively breastfed for the recommended first 6 months of life, well below the Healthy People 2020 target rates. The rates are significantly lower for African American infants. The 2011 Pediatric Nutrition Surveillance (Figure 2) shows that the breastfeeding rates in the United Stated vary greatly by race/ethnicity. 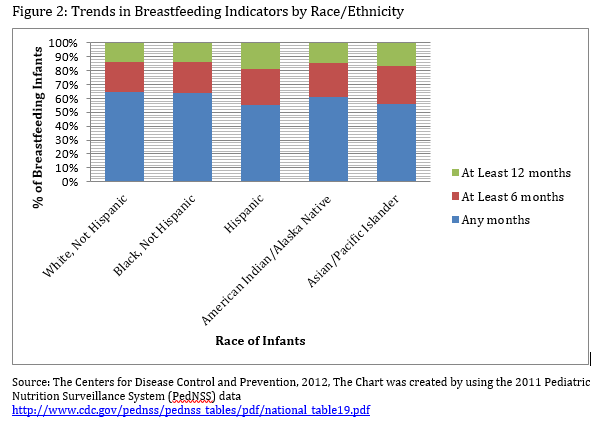 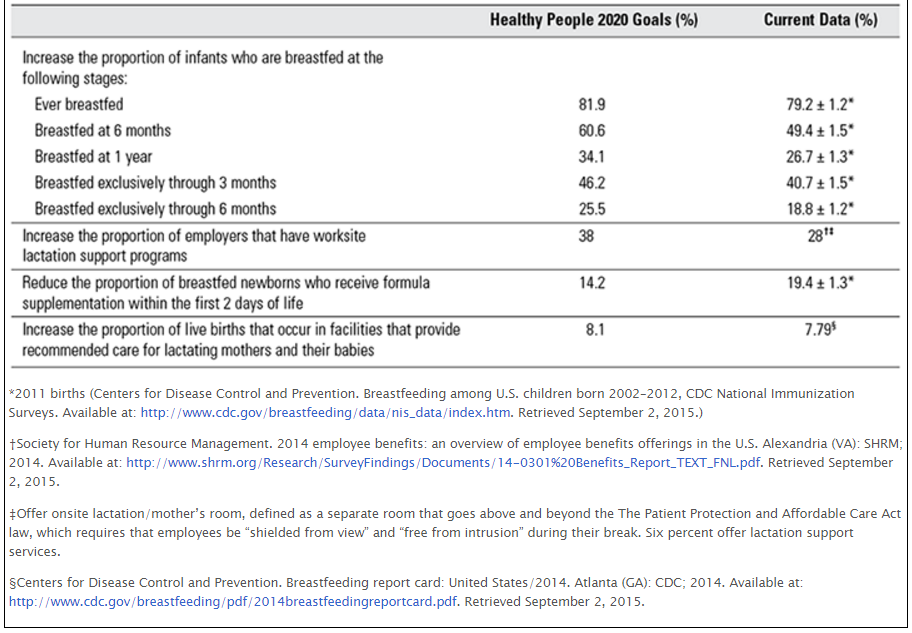 Breastfeeding allows babies a healthy start in life and offers tremendous beneficial effects for both mother and baby. Breastfeeding:

Babies who are breastfed are at a reduced risk for ear, respiratory, and gastrointestinal infections; asthma; sudden infant death syndrome; and necrotizing enterocolitis. In addition, evidence suggests that breastfeeding is associated with a reduction in the risk for obesity and diabetes in children and reduced risk for maternal breast and ovarian cancers, diabetes, and cardiovascular disease. Figure 4 further illustrates the health benefits of breastfeeding. 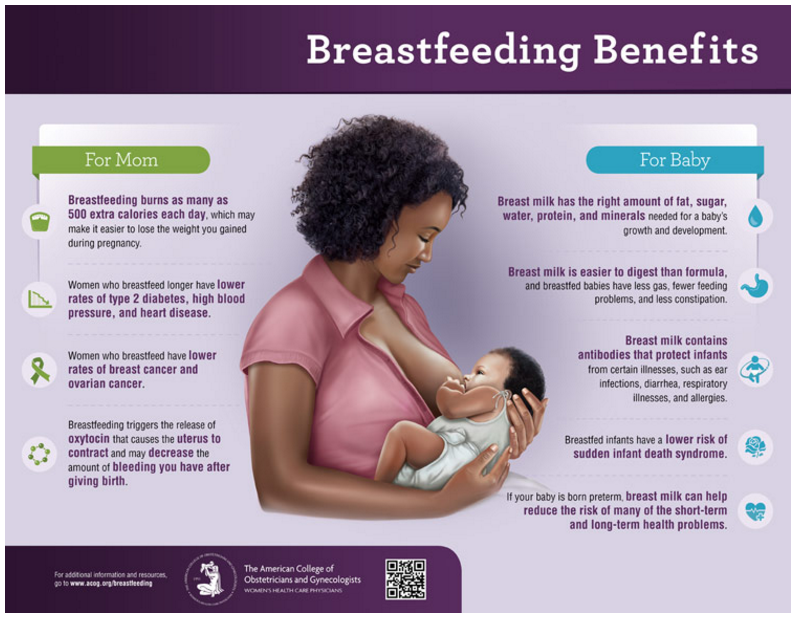 In a global context, in many countries, exclusive breastfeeding and continued breastfeeding for 2 years provide high-quality nutrients and adequate energy and can help prevent hunger, undernutrition, and co-morbidities. A 2013 United Nations Children’s Fund (UNICEF) report titled Tracking Progress on Child and Maternal Nutrition suggests that infants who are not breastfed are 15 times more likely to die from pneumonia and 11 times more likely to die from diarrhea than children who are exclusively breastfed. Similarly, all-cause mortality is 14 times higher for infants who are not breastfed than for exclusively breastfed children.

Mothers in the United Stated face a variety of challenges that influence starting and continuing to breastfeed. Figure 5 emphasizes some of the main barriers women face. 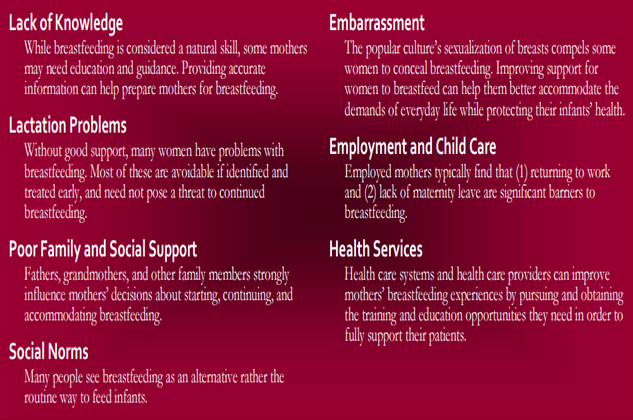 Actions To Improve Support for Breastfeeding

Baby-friendly hospitals make special efforts to support mothers to breastfeed. The World Health Organization (WHO) and UNICEF’s Baby-Friendly Hospital Initiative was endorsed by the American Academy of Pediatrics. The 10 qualities of a Baby-Friendly Hospital Initiative has been shown to increase rates of breastfeeding initiation, duration, and exclusivity.

Appropriate workplace accommodations for employees. The ACA mandated for the first time that employers with more than 50 employees must provide a private place for breastfeeding moms to pump their milk at work. Twenty-four states, Puerto Rico, and the District of Columbia also have policies supporting breastfeeding in the workplace.

Globally, WHO set a target by 2025 to increase the rate of breastfeeding by 50 percent. The organization also recommends supportive programs and policies for breastfeeding mothers at workplace and national policy level (see Figure 6).

Figure 6: Breastfeeding Global Target and Recommendations by WHO 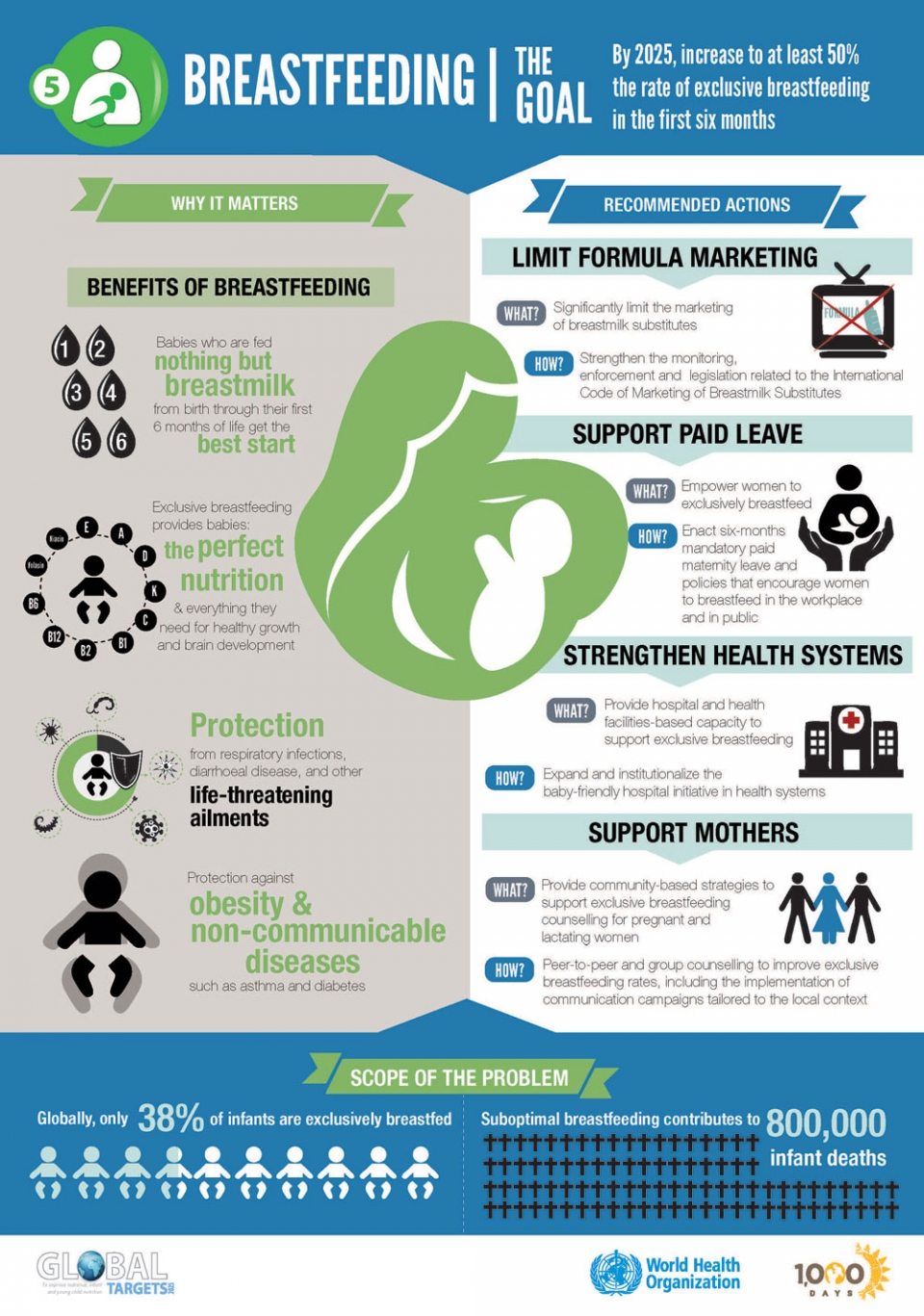