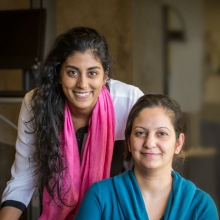 Why so? Because radon is the second most important risk factor for lung cancer, and exposure to it can be prevented.

In this blog, we’ll describe radon and discuss the health consequences resulting from radon exposure, as well as ways to prevent exposure.

Radon is a radioactive gas emitted in homes from the soil, water from wells, and building materials and tends to concentrate in enclosed spaces like underground mines or houses.1,2,3 It is odorless, colorless, and tasteless, but it’s a major source for exposure to ionizing radiation in the general population. Radon is formed in the process of uranium decay, and it continues to decay inside the body after inhalation, exposing the lung tissues to high doses of ionizing radiation from the inside. This internal radiation exposure could lead to DNA damage and eventually cancer.2,3 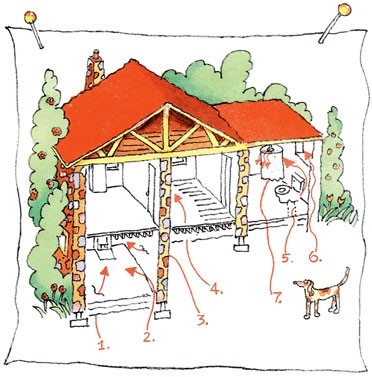 See image above for ways radon gets in homes: 1 and 3 Cracks in solid floors and walls, 2 Construction joints, 4 Gaps in suspended floors, 5 Gaps around service pipes, 6 Cavities inside walls, and 7 The water supply.4

What are the health consequences from exposure to radon?

Lung cancer is the second most common cancer in men and women. The American Cancer Society estimates that about 221,200 new cases of lung cancer will be diagnosed and 158,040 deaths from lung cancer will occur in the United States in 2015.5

According to the World Health Organization handbook on radon, the proportion of all lung cancers linked to radon is estimated to lie between 3 percent and 14 percent, depending on the average radon concentration in the country and on the method of calculation.2 Health consequences other than lung cancer are currently being studied.2

Testing for radon is quick, inexpensive, and potentially life-saving if you live in a high-radon area. Radon gas test kits can be purchased from local hardware stores, retail outlets, Amazon, or through the mail. For general information about radon in your area, contact your state radon office.6 If you live in an area with elevated levels of radon, the EPA recommends that you test your home. Any level of radon is a potential health hazard, but levels 4 picocuries per liter (pCi/L) or higher should be fixed. If you are buying or selling a home, you should contact your state radon office to obtain a list of qualified testers. Repairing cracks and holes in the foundation can drastically reduce radon levels in your home. To find more information about local radon zones and radon programs in your area, please refer to the detailed map below, with areas in zone 1 having the highest levels of radon.7 For more information on how to test and eliminate radon exposure, consult A Citizen’s Guide to Radon published by the EPA.4 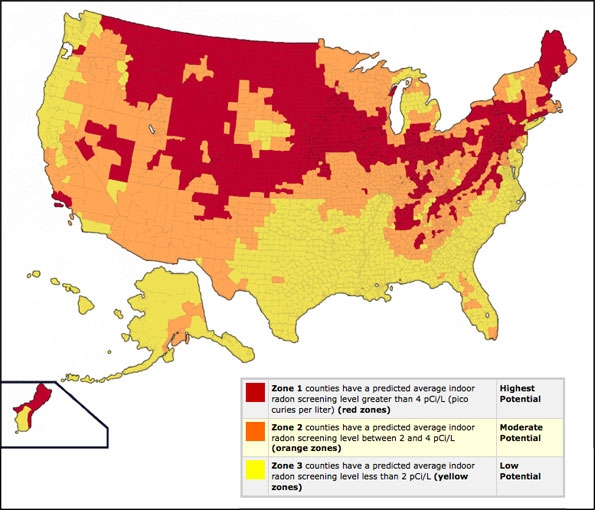