Taking a Stand: How I Learned To Love a Standing Desk 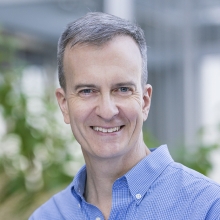 Have you ever read an article that suddenly altered your perspective on something you do every day?

For me, that happened in 2012, and the article was about sitting. It described the results of a long-term Australian study of a quarter of a million people that found sitting for several hours at a time could be a health risk, no matter how active someone is when they aren’t sitting.1

Specifically—and this was what startled me—the study revealed that people who sit an average of 11 hours a day or more had a 40 percent increased risk of dying in the next 3 years, compared with those who sat for less than 4 hours a day.2

I thought about my daily routine: 9 or so hours sitting at work, 1 hour commuting each way, plus some sitting at home in the evening…. In a flash, my self-image changed from “healthy person” to “mortality statistic waiting to happen.” The next thought was instantaneous: “standing desk!”

Doubts kicked in quickly, though. Wouldn’t standing for much of the day be kind of, well, tiring? And tough on the feet? Would it diminish my concentration? Ultimately, those alarming study findings won out, and before long, I had my new desk and was ready to give it a go.

Would You Stand For This?

At first, the doubts seemed to be justified. After about 2 hours at the standing desk, my legs started aching a bit; my feet would have complained, too, but they were numb. So I still sat for about half the day overall. For the first week or so, when the day came to an end, I felt more tired than I had before.

By week 3, however, it was sitting in my office that felt a little weird. I took that as a good sign.

Gradually, I improved my standing posture, and little aches in the back and shoulders that had accompanied hours of sitting disappeared. Doing standing stretches went from the “you must be kidding” category to “as often as possible.” What was this standing desk, anyway—a miracle worker?

By the time I added a sturdy yet flexible mat to stand on, thus returning feeling to the feet, my “sitting years” looked like the Dark Ages. True, I’m usually ready to sit for a bit in the late afternoon, but rarely for long. For the most part, standing for several hours no longer feels like taking medicine; it simply feels good.

As more research has come out on the health problems associated with long periods of sitting, I’m increasingly happy about taking a stand.3,4 Prolonged sitting is associated with a higher risk for (to name just a few problems) heart disease, colon cancer, softer bones, spinal-disk damage, and even slower brain function.5 (So much for wondering whether concentration would slacken if I stood for hours.)

Of course, a standing desk isn’t the only way to be less sedentary in the workplace. Walking breaks, walking meetings, and using communal treadmill desks have all been shown to improve overall health.6 And recent research has confirmed that standing isn’t enough on its own to make a difference; movement is just as important.7 Still, a person has to stand before they can walk, right? I’m thankful for realizing I was jeopardizing my health without knowing it—and for the desk that makes the healthier choice an easy one. 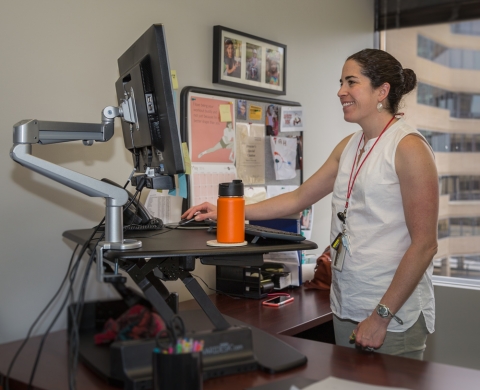 1Sifferlin, A. Why prolonged sitting is bad for your health. TIME Healthland, March 28, 2012.